When Marvel’s Avengers launched last year, developer Crystal Dynamics laid out ambitious post-launch support plans for the game. Unfortunately, those plans have been largely delayed due to the shift to working from home during the COVID-19 pandemic and various reprioritizations stemming from community reception. Today is a big day for Marvel’s Avengers, and Crystal Dynamics is capitalizing on it with more announcements of what’s to come this year.

It all starts with today’s release of Clint Barton’s Hawkeye and the launch of the PlayStation 5 and Xbox Series X/S version of the game. Players can upgrade to the new-gen version free of charge, adding enhanced visuals and unique DualSense features for those playing on PlayStation 5. The patch that includes Hawkeye also adds the ability to replay the Reassemble campaign, as well as customizable HARM Rooms to really put your heroes to the test. However, to cap off Marvel’s Avengers’ big day, Crystal Dynamics also revealed its 2021 roadmap, which it hopes will give players myriad reasons to continue playing after they complete the primary story content.

The general approach Crystal Dynamics wanted to take with the game in 2021 is to address any remaining technical polish, update character progression, add quality-of-life improvements, ease repetition, and make players feel more powerful when controlling Earth’s Mightiest Heroes. “We listen – we really do,” says studio head Scot Amos. “We hear what you guys are saying. We hear what the press is saying, what the media is saying. It’s our job to take all of that, process that – good and bad – and we’re going to say, ‘How do we use that to help adjust our philosophy?'”

The result is the Marvel’s Avengers 2021 Content Roadmap. I caught up with Amos and lead game director Morgan Gray to learn more about what the future holds.

Stemming from the events in Operation: Taking AIM and Operation: Future Imperfect, the Tachyon Anomaly events give a narrative reason for certain missions to feature multiple versions of the same hero. This means that if you want to play as four Hulks as you smash through a map or take to the skies as two Thors and two Iron Men, that’s an option.

In addition to giving players the oft-requested feature for specific missions, Tachyon Anomaly also brings with it rewards for teaming up with multiple versions of the same hero. Additionally, a new Tachyon mission is joining the War Table, and Tachyon missions will be available more frequently for players. These missions will be open to power levels ranging from 1 to 100. 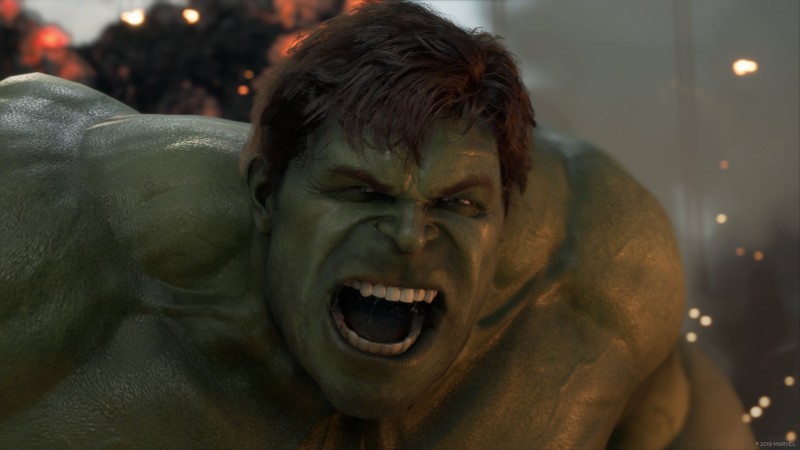 A common practice for living games is to react to real-world events with in-game celebrations and engagements. To this point, Marvel’s Avengers hasn’t had much crossover with the Marvel Cinematic Universe, with the phenomenon that is WandaVision coming and going with no acknowledgement within Crystal Dynamics’ game. However, that is changing with the impending release of Black Widow, which is scheduled to hit theaters this May.

Drawing inspiration from Natasha’s backstory, a new Red Room Takeover event is coming to Marvel’s Avengers this spring. Yelena Belova has placed surveillance chips in AIM bots, and the Avengers must defeat the enemies with the chips. Later, the HARM Room is hacked by Yelena and takes on a red visual style. The Avengers must complete a special challenge set up by Yelena to escape. The main menu will also take on a Red-Room-inspired look during the event.

As part of the Red Room Takeover event, players will begin seeing outfits inspired by the Marvel Cinematic Universe. “It’s not a crossover by any means,” Amos says. “It’s more of an homage to stuff that we all know and love. People have been asking to see more of the MCU skins in our marketplace.”

Readers of Marvel comics are likely well aware of the power of the Cosmic Cube and what it can mean for the story going forward, and in Marvel’s Avengers, the insidious organization AIM is looking harness its power. Taking place in the Frozen Tundra, Monica has created a Cosmic Cube to help AIM become even more powerful.

The Cosmic Cube’s reality-bending power loops Old Man Hawkeye into the fray as the Avengers take on Scientist Supreme in a new boss battle that features an army of tech-enhanced Monica clones. This also adds a new Villain Sector centered on Scientist Supreme, with a story that involves Hank Pym.

While this may seem like a standard, story-driven piece of content on its own, Amos hints at this being more of a jumping-off point for Marvel’s Avengers. “This is the thing that can change the reality of the world … of the universe, for that matter,” he says. “All of [the story events to this point] lead up to this moment with the Cosmic Cube that gives the opportunity for really expanding our universe and what is possible. All of that is meant to be linked together. It’s always been that expanding story. It’s just taken us a bit longer than we would like to get those pieces strung out there for people to see it.” 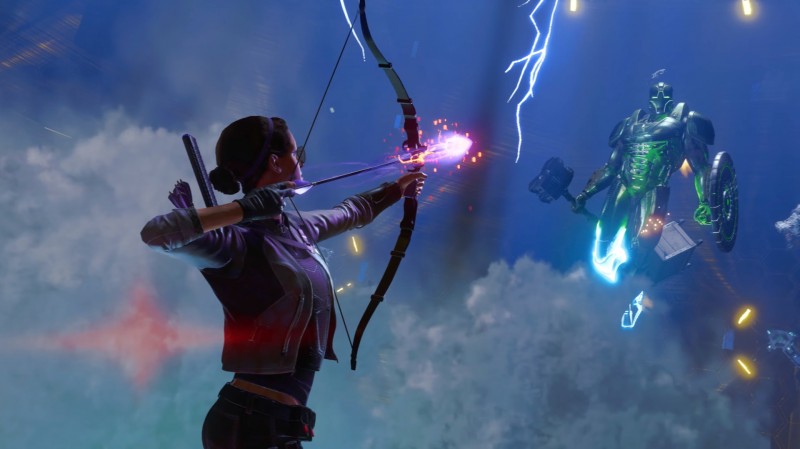 For players looking for the ultimate challenge, Omega-Level Threats are coming, taking existing encounters in Marvel’s Avengers and cranking their difficulty up. The two Omega-Level Threat missions announced are Resolution, which features an amped up Super Adaptoid encounter from Operation: Taking AIM; and Cloning Labs, which is a four-player mission that spawns up to four Abominations for the team to take down. Completing these missions rewards players with unique gear, including Super Adaptoid gear for completing Resolution.

The Wasteland is introduced as a new biome in the game through Hawkeye’s Operation: Future Imperfect today, but later this year, it will play host to a new War Zone mission type: Patrol mode. In this new game mode, players drop into a large map designed to allow them to move from one area to the next with no set objective. Instead, players decide where to go and what to engage with.

In the Wasteland Patrol, players can visit locales such as the Kree sentry graveyard, a ruined city, and a SHIELD stronghold. Crystal Dynamics plans on adding more goals to incentivize players to return over and over to complete the objectives within this mode.

Wasteland Patrol is set to arrive in Marvel’s Avengers later this year.

Crystal Dynamics intentionally uses the word “expansion” instead of “Operation,” which was used for Kate and Hawkeye’s drops, to denote the size of the addition. “For us, when we talk about an expansion, there’s an expectation we’re setting for ourselves and for players that this is bigger than an Operation; this isn’t just a hero drop,” Amos says.

Black Panther and the War for Wakanda expansion arrives later this year. To learn more about this upcoming expansion, head here.

Last year, Crystal Dynamics and PlayStation announced that Spider-Man would be joining the Avengers exclusively on PlayStation consoles in early 2021. When I ask Amos for an update on everyone’s favorite webslinger, he unfortunately can’t say too much. “PR has allowed me to say that we have people working on Spider-Man right now,” he says. “It is a thing and it will be a thing, and we will talk about it sometime in the future.”

That “early 2021” window has essentially passed for Spider-Man’s inclusion into Marvel’s Avengers, but hopefully we’ll hear something soon regarding the introduction of the character. 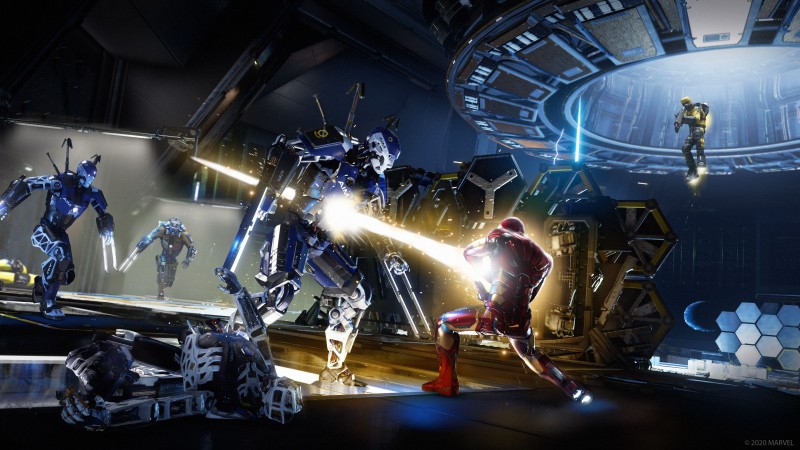 More on the Horizon

On top of everything discussed above, Crystal Dynamics is committed to the continued evolution of the core game. Amos laid the team’s goal to deliver high-quality content when it’s ready, while also improving its lines of communication with the community. As part of the gameplay evolution still to come, Crystal Dynamics hopes to make players feel like the superheroes they should feel like, adding power in the palm of players’ hands through various gameplay tweaks, including better progression mechanics, gear you’ll want to pursue, and augmentations that will change the way you play.

As part of a series of ongoing improvements, Crystal Dynamics is looking into additional balance tuning, better gear and progression, improving the collectible comics system, and better matchmaking. It’s also adding multiplayer megahives and post-level 50 progression to encourage players to keep coming back.

“The roadmap and our releases are all trying to expand our world across multiple vectors,” Gray says. “We want to do whole new mission types that have a unique identity to them and a unique reward scheme. Clearly, we have our eyes targeted for bringing in some villains in new ways, and new villains and new enemy factions so that the world feels like it’s expanding. We want to make sure that the loops we have today, and the new gameplay loops are adding what we call internally as ‘stark contrast.’ We’ve heard from people […] that some of the dough may be spread too thin, and so we’re trying to make sure that the new things we’re adding in have a discernible, strong identity in and of themselves in contrast to the rest of what we’re offering in terms of mission mode types, gameplay objectives, locations, and enemies.”

But all the problems of Marvel’s Avengers won’t be fixed in a single day or in a single content drop, and Crystal Dynamics knows it has to play the long game. “I think the roadmap points to, like, we’re going to do this brick by brick,” Gray says. “We’re not currently saying we’re going to drop a release and it’s all solved. But this is how we want to build our universe: Expand on these vectors with each release, both from a narrative point and from a gameplay-style point and everything in between.”

Marvel’s Avengers launched last year to reviews that largely praised the story-driven modes, while criticizing the post- and endgame loops. Hopefully these changes will address those widespread sentiments by giving players more reason to step back into the shoes of their favorite heroes time and time again. Marvel’s Avengers is now available on PlayStation 5, Xbox Series X/S, PlayStation 4, Xbox One, Stadia, and PC.

Best Renegade Moments In Mass Effect Legendary Edition
Sometimes it’s good to be bad. While not all
063