Dragon Age 2 was released ten years ago today, and even now, you can’t even bring up the name of the game without someone saying this was the “death of BioWare” or that the sequel “sucked.” Due to a rushed development timeline and a lack of resources, Dragon Age 2 was a hodgepodge of glitches, a short narrative, and repetitive environments. But even with those factors working against it, Dragon Age 2 managed to tell an incredible tale in a short amount of time, and that’s largely because this game has some of the best characters and character development in gaming history. Still with me? Let me explain.

RPG fans fell in love with everything BioWare had to offer with Dragon Age Origins. The world, the intriguing characters, the plot twists? It was an incredible experience still very much celebrated to this day. When its sequel, Dragon Age 2, came out, it was almost like a completely different game, and that jarring comparison initially made it confusing to weigh in on the experience.

When I first played Dragon Age 2, I was so conflicted. I beat it, and like many others, I was shocked at the ending. Not just because of that “Dammit, Anders” moment that we all love to talk about so much, but by how quickly it was over and how differently paced the third chapter felt. The progression felt like a mudslide: In the first chapter, everything was paced beautifully; everything seemed fine. The second chapter is where, as a player, I began to feel the foundation slide. The third chapter is where the house slipped away entirely into a pit of “what the hell?” and where I really started to notice the launch deadline’s influence. For reference, Dragon Age 2 released on March 8, 2011 – only about 16 months after the November 3, 2009 release of Dragon Age: Origins (which BioWare spent over five years developing).

While expansions helped elongate the experience, there is no denying that Dragon Age 2 was unnervingly short, especially when compared to Origins and Inquisition. But that’s also what plays a role in why it’s so impressive: Even with the cut resources and the rushed timetable, BioWare somehow still managed to not only give us characters we cared about immensely, but gave each of them their own arcs that allowed us to grow with them. 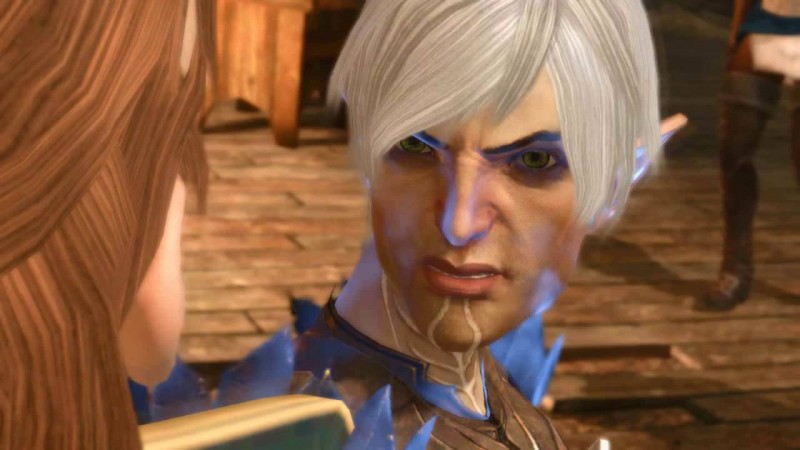 Depending on what in-game dialogue options you choose, you can see Isabella learn about her capacity for love beyond its physical expression. You watch Merrill learn heartbreaking lesson after lesson, only to grow into her own despite many in Hawke’s little group disapproving of every step she took. You see Aveline’s surety as a leader in a city that needed a clear head.

You also witness a critical moment with two key characters: Fenris and Anders. Two sides of the same coin, Anders is an escaped mage trying to live in a world that wants him dead. Fenris is an escaped slave from Tevinter trying to learn what freedom even means. In critical moment during Act 3, the pair meets at the same fork in their lives’ paths: Do we let our trauma destroy us, or do we accept its role and grow from it? In an argument between the two (something that is not uncommon throughout the game), there is a definitive moment where Anders takes on a more aggressive tone. Fenris matches that tone not with anger of his own, but with a surety when he tells Anders that he misunderstood where he was coming from and that he recognized the dangerous position Anders finds himself in morally because Fenris has faced a similar crossroad. It’s here that we see Fenris make his ascension into freedom, and Anders descends into further losing himself in his anger, his perceived role in society, and the influence of Justice (a spirit of compassion that inhabits Anders’ body after Dragon Age: Awakening).

BioWare also did an incredible job at offering characters that balance each other out. The evolving bickering between Aveline and Isabella and Sebastian and Anders were among some of my favorite party banters in the game. Whether Hawke is there or not, these characters had lives of their own, loves of their own, and their own journeys of self-discovery to undergo while the city around them slowly devolved into chaos. These relationships paint a vivid picture of life and love, and that interconnection is experienced heavily during banter while on missions or during critical loyalty quests. Seeing the pirate queen’s hidden heart of gold and Varric’s battle against the norms of what it means to be a dwarf are experiences that I treasure, and they are what made Dragon Age 2 a hidden gem for many others as well.

As with any RPG, that allows me the chance to romance different people or to choose different paths, I dove in for a second playthrough of Dragon Age 2 to see what I may have missed and to see if a different romance option would allow me to feel differently. After romancing Merrill as a female rogue Hawke that chose the diplomatic options (blue), playing as a female mage Hawke that romanced Isabella with the choice of the more comedic purple options made this game feel like an entirely different adventure. From dialogue options to how the companions treated me through each chapter, the magic of Dragon Age 2 is its characters, and that magic makes each playthrough wildly different from any other.

Now, after 19 playthroughs as various Hawkes, and I can honestly say there is a magic to Dragon Age 2 that is so unfairly buried due to circumstance. This is also why when the topic of “what do you want to see get a remaster next,” Dragon Age 2 is often my go-to answer; it deserves a second chance. This story was incredible. The loss that Hawke felt, repeatedly, is in a league all of its own. Hawke was never meant to be a hero, and that’s that true tragedy of it all. But that nuance and that careful attention to detail with the narrative as a whole is bogged down by the more glaring issues and the absurd amount of spiders. 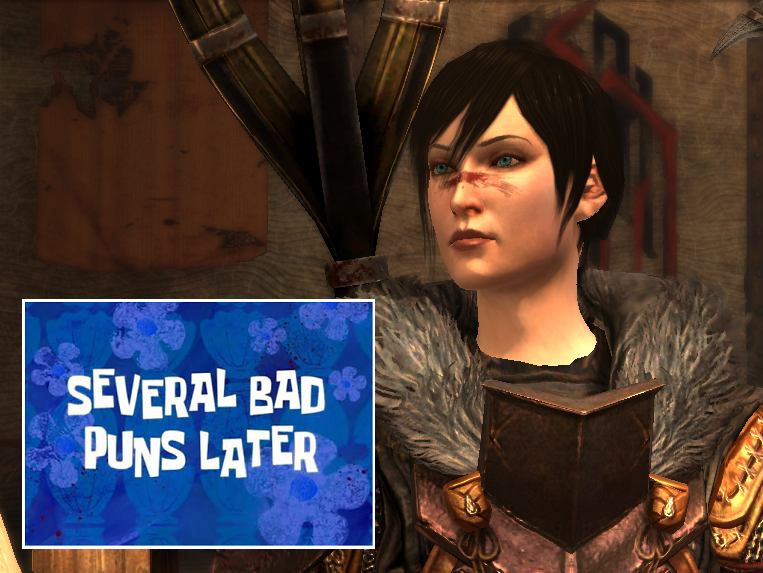 If you’ve followed my work at all, you know this is a hill I’m likely going to die on, but as we celebrate 10 years of the game that gave me Fenris, I will never stop championing what a remarkable journey this game was despite its shortcomings.

And as for all the repeating cave environments, I have a head-canon theory that helped make those similar delves more bearable. Dragon Age 2 is a story told via a narration of Varric Tethras: rogue storyteller and “occasional unwelcome tagalong.” I don’t know about you, but when I retell stories, I tend to forget small details or pull away certain aspects of the story to focus on what the entire tale is about in the first place. Something that helps me put the entire game’s pacing a little more into perspective from a fantasy point of view, not a development one, it’s easier when thinking that the repeating areas are due to one simple fact: Varric hates caves. He is the least dwarfy dwarf to have ever dwarfed, and he says this numerous times throughout the entire franchise. He hates anything where he can’t see the sky, so in my head? All of these areas bleed together because he’d rather them not exist in the first place. Is that the real reason? Nah, but it’s fun to think so.

What do you think about Dragon Age 2? Do you agree that, despite its flaws, the sequel offers something truly unique or do you think this is one fan’s mad ravings meant to justify liking a controversial game? Sound off with your thoughts in the comment section below; Flemeth would want you to.