Cord is a developer based in Marysville, Washington. Cord is passionate about video games, technology, and web programming. Since the early 2000s, Cord has followed the competitive community of FPS gamers.

Where to find Planes in Fortnite Chapter 2 – Season 5?

Since then, the Fortnite community has been asking Epic to add planes back to the game. More recently, after the v15.10 update, leaks suggested Epic is bringing planes back to Fortnite.

The leak was confirmed when Epic introduced the Snowdown Shuffle LTM, which included something called Air Royale. This latest patch update included airplanes, meaning the X-4 Stormwing returns to Fortnite.

Where can players find Planes in Fortnite Chapter 2 – Season 5?

Here’s what the outposts and airplanes look like! Photo via @nxtpyne pic.twitter.com/gPYpvzeqBn

Of course, players are crazy about adding planes. Therefore, it is best to establish the exact locations where these planes can be found in Fortnite Chapter 2 – Season 5.

During Operation Snowdown, players will have the opportunity to play various LTM modes such as Rally Royale, Air Royale, Pickaxe Frenzy, and so on. Out of all of these LTMs, Air Royale is by far the most intriguing.

Here, players can fly the iconic X-4 Stormwing in an attempt to eliminate opponents. However, planes can also be found in Fortnite’s Battle Royale mode.

Compared to Chapter 1 – Season 7, the following POIs were the usual places to find planes in Fortnite:

South of the Pleasant Park

West of the Tomato Temple

Around the salt springs

However, most of these POIs have been removed and only Pleasant Park has stood the test of time. According to recent leaks, players can still go down to Pleasant Park as this is one of the places where planes spawn in Fortnite.

YouTuber NeonSlice has made an extensive video where he explores new airplane spawns in Fortnite. According to the video, Snowmando outposts and planes will have a Fortnite Chapter 2 – Season 5 correlation.

Winter is coming this week. Join Snowmando for new quests, cool items added to the island, and new fan-favorite LTM modes you won’t want to miss. Complete all Operation: Snowdown quests and get tons of free snow cosmetics, including two exclusive outfits. 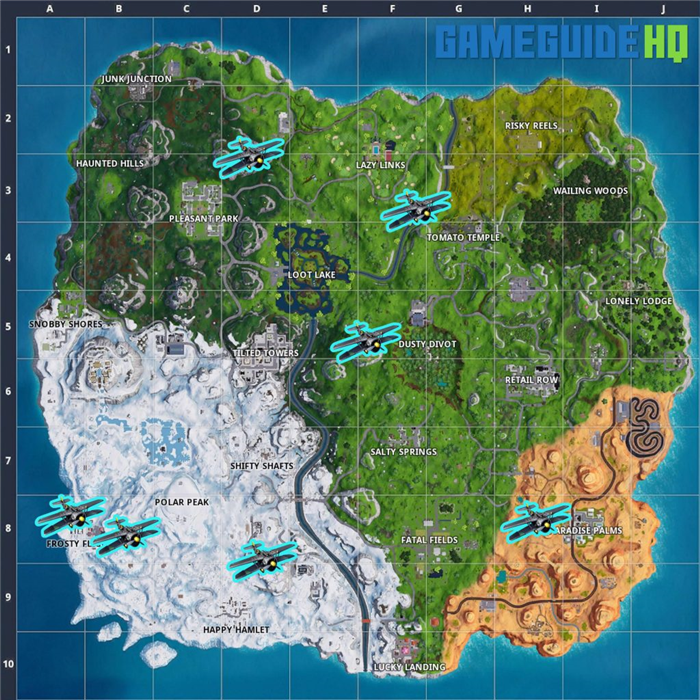 Using the overhead map is nice to get a general idea of ​​where planes spawn. However, if you’re having trouble locating the Stormwing X-4, see the detailed spawn locations below.