The Story Behind Supergiant Games’ Transistor

Coming off the heels of our latest issue, which features a profile on close-knit studio Supergiant Games, we’re also sharing parts of the indie developer’s amazing journey online by posting the stories behind its inventive titles. Last week, we took an in-depth look at Supergiant’s formation and its debut game, Bastion. Now we’re shining the spotlight on the studio’s hotly-anticipated follow-up: Transistor. The studio’s second game certainly changed things up, bringing in a fresh new setting and twist on the action/RPG genre. The sci-fi RPG follows a famous singer named Red who gets more than she bargained for when she avoids an assassination attempt on her life and picks up a sword-like weapon that can communicate with her. All eyes were on Supergiant to deliver another hit, but Transistor turned out to be a project full of highs and lows, as the team worked to prove they weren’t just a one-hit-wonder. 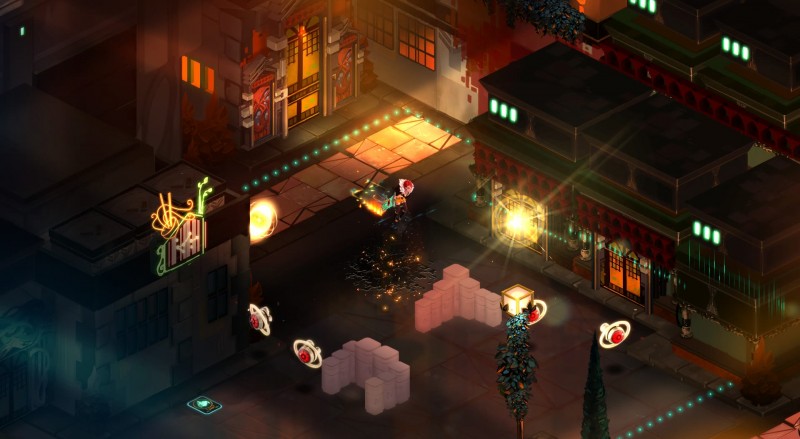 Transistor remains Supergiant’s most challenging project to launch. Bastion took 18 months to complete; Transistor’s pre-production cycle alone took longer than that. It was also the first time a project started with a full team on hand. Not to mention Bastion’s success was still in full view, thanks to part of the team focusing on getting it to work on mobile. The studio was also growing, adding a few new roles (like a 3D artist) that it had previously hired freelancers for. Eventually, the staff grew up to 12 members.

“We were starting the game with a full team – including more voices and perspectives and learning how to do that,” says studio director Amir Rao, adding that things that took weeks to figure out for Bastion took months for Transistor. “There was also all this invisible pressure of wanting to live up to [Bastion] – a game that was really well-liked and seemed with time to be getting more well-liked.”

The team had put all they had into Bastion, all the ideas they had dreamed up if they ever had the chance to make their own game. “It’s like you have your entire life to make your first album and a year to make your second,” says composer and audio director Darren Korb.  “All of the ideas you’ve ever wanted to use, you can use on your first thing, and then you have to make all new ideas for your second thing in this much shorter time.”

After having most of her art go directly into Bastion without much time for iteration, art director Jen Zee welcomed the pre-production phase as it gave her more time to ideate on her art. “I would say I may differ from the other guys in that I remember Transistor quite fondly,” she says. “It represented an opportunity for me to basically evolve what I had done on Bastion into something slightly different –  and in what I hoped would be better. I had all these issues [in Bastion] with how I’d made some of the environments too overly detailed and the color was a little too strong here and there. I had no compositional control over certain things and didn’t work with light and shadow enough. Transistor represented where I could improve that stuff, having learned off of Bastion, and it was also basically a fresh start.”

Supergiant knew it didn’t want to do a Bastion 2, even if that would have been the safe choice. The team also decided early that Transistor would feature a science-fiction love story in a cyberpunk setting – but without the gritty backdrop. “We were really interested in kind of slowing things down and having a game with a more deliberate pace,” says creative director Greg Kasavin. “We were seeing if we could capture the kind of drama and suspense of turn-based strategy games where you’re biting your nails, wondering if things will go horribly wrong. We wanted to see if we could capture it in an action/RPG setting. I think we got to them in the end, but it was a long, winding road.” 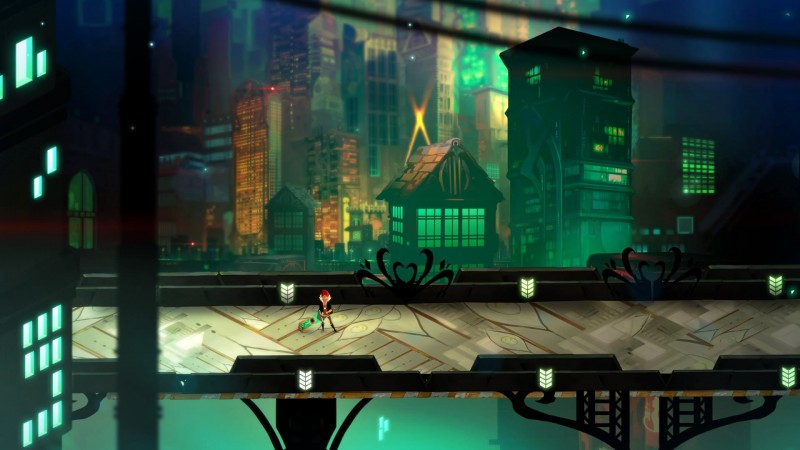 While the team agreed on these aspects of the game, they still struggled to agree on Transistor’s direction and the difficulties continued to mount the longer it took to get things going. “It was really challenging for that game to find its point of view and to find its gameplay,” Rao says. “It was challenging across the board to find its specific artistic and musical execution, to find the character voices, everything.”

Being on the project from the beginning this time around as creative director, Kasavin said he ran into his own frustrations figuring out exactly what his role should be and bringing together the work of a much bigger team. It even led to his relationship with Rao being a little strained as they figured out the game. “Amir and I clashed on Transistor,” Kasavin says. “Nothing bad, but after having worked together quite harmoniously overall on Bastion, the pre-production on Transistor was more fraught. We just had more disagreements and struggles to align on what the game should be and what it should feel like. I think it’s attributable to the part where we literally had never had a pre-production phase like that before.”

Kasavin and Rao weren’t the only ones who felt hardship. After getting such praise for Bastion’s score, Korb struggled to find the sound for Transistor, saying he experimented for six months before he got it, calling it a “hair-pulling, frustrating experience,” due to the added challenges of trying to write from a specific character’s perspective and having main character Red be a famous singer. “The music, like it had to, was given a lot of responsibility for some of the emotional beats,” he says. “I’m glad it worked out.”

Getting the project past the conception phase took much longer than expected, causing tensions to rise. “The sort of the honeymoon phase of having pre-production time ended after a couple of months,” Kasavin recalls. “And suddenly we were just wandering in the woods in a way that was new to our team.”

Things reached a breaking point right as the team was about to unveil the game at PAX East 2013. “We were so nervous about how it was going to be received that we almost pulled the plug,” Kasavin says. The team was set to announce Transistor on a Tuesday, but was still having conversations on Sunday if they should change course. “That’s how tense we were about how the Transistor announcement was going to go over,” Kasavin says. “Because even at that point when we felt we had something to show that was like a real expression of what we were working on, we were still getting kind of mixed playtest feedback.”

Ultimately, the group decided to move forward, figuring even if they had extra time, it wouldn’t fundamentally change anything. “If people didn’t like it, it would be better for us to know that sooner,” Kasavin says. “But the announcement went over way better than any of us expected. It was just incredibly encouraging.” 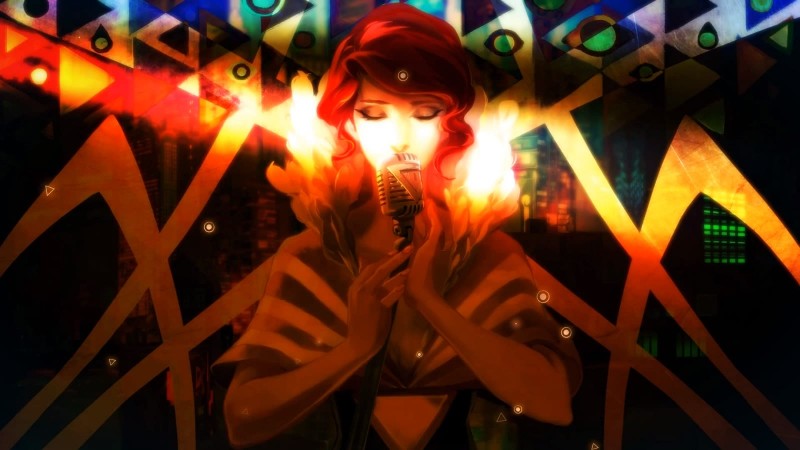 When it launched in May 2014, Transistor was a success. Our own Matt Miller gave the game a 9 out 10, writing: “Supergiant Games’ follow-up to Bastion is a powerfully imaginative action/RPG that evokes a sense of wonder and revels in experimentation.”

It wasn’t just a success critically, either. Since Supergiant Games self-published Transistor at a higher price point than Bastion, it brought in more money – quickly. “I think history may show that Transistor was our most important title because of its immediate success,” says principal voice actor Logan Cunningham. “Because it was just like, whatever else the team behind Bastion had next, there was a huge audience in place that was going to get it no matter what.”

But it didn’t exactly provide all members with the happy feelings they felt after the launch of Bastion. “I love that people love Transistor so much,” Cunningham says. “But I don’t have very fond memories of that process. It was really hard. It took the most time and we didn’t know what it was for a while.”

Zee differs a bit from the others, as she will always have a special affection for it. “Transistor was the closest to my heart, in the sense that it is in a style that is closest to what I would naturally end up creating on a daily basis.”

Either way, the team had proven themselves once again and got what they needed: the ability to keep working together on another game. Kasavin said it best: “We survived another round. Even if we could financially withstand a bit of a failure, I think culturally, it would have been really difficult for us to move on.”

You can check out our previous feature on the story behind Bastion here. Stay tuned for Supergiant’s journey through Pyre hitting later this week! 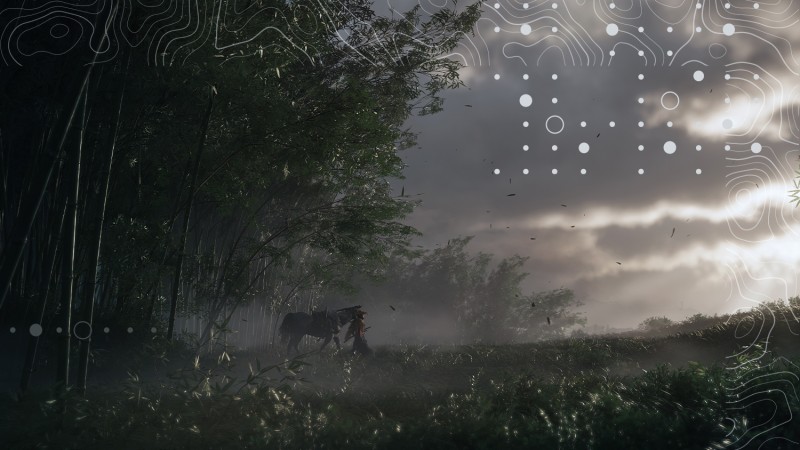 More Than Just Dots On A Map: The Challenges Behind Open-World Game Creation
Introduction Video games are constantly getting more
00