VR Requirements for PC Complete 2022 Guide. What do i need to run vr

You can now use VR to climb Everest, explore the Grand Canyon, take a gondola ride in Venice and watch an array of surprising 360-degree videos posted by GoPro wearables worldwide. Looking even further, Mars 2030 will let you roam the surface of Mars.

Will it Run? VR Hardware Requirements for your PC or Laptop

Virtual reality applications are taking our world by storm.

But whether you want to play the latest VR games or make a living creating VR and AR applications, you need a computer or laptop that is powerful enough.

Why should your computer be powerful? Because it performs all the tasks: processing and rendering.

But not every computer is up to the task. If you want your virtual reality applications to run smoothly, you need stations that are above average.

But fear not, there are still affordable options on the market that meet the minimum requirements.

In this guide, we’ll help you find out if your computer is powerful enough to run VR applications on any high-end headsets, or if you need to upgrade any of its components.

We’ll also make the latest PC builds available for each price segment so you can buy or build a VR ready PC from scratch.

Can I Run VR on my PC or Laptop? 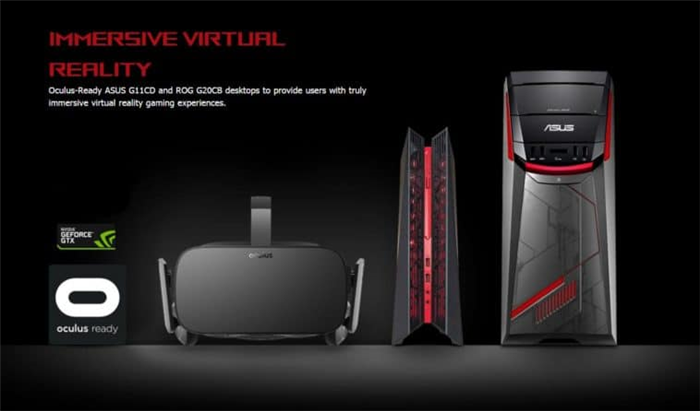 There are three main components that determine whether a computer is VR-ready: processor (CPU), graphics video card (GPU), and random access memory (RAM). Let’s go through each of them.

The GPU requirements are particularly high as it has to render two displays to create a VR experience, one for each eye. Add to that the much higher rendering resolution for VR applications, and you’ll understand why your average GPU might not be enough.

We recommend that you purchase at least the minimum graphics card recommended for a consistent frame rate of over 90fps. A cheaper GPU can run VR applications, but the lower FPS can make you feel nauseous.

In general, most processors with four or more (quad-core) processors are recommended for sufficient processing power. Below are the minimum CPU requirements for most VR headsets, including HTC, Oculus, and Valve.

Most VR goggles require a minimum of 8 GB of RAM. The only exception is the HTC Vive Pro and HTC Vive Pro Eye which can run from just 4 GB. HTC Vive Cosmos also requires 8 GB + RAM.

How To Easily Check If Your Current PC Is VR-Ready

Instead of relying on writing performance statistics, use a software test to determine if your system is performing well enough. Download and use the SteamVR Performance Test from the Steam Store. The tool will automatically measure your system’s rendering power with a 2-minute VR demonstration. 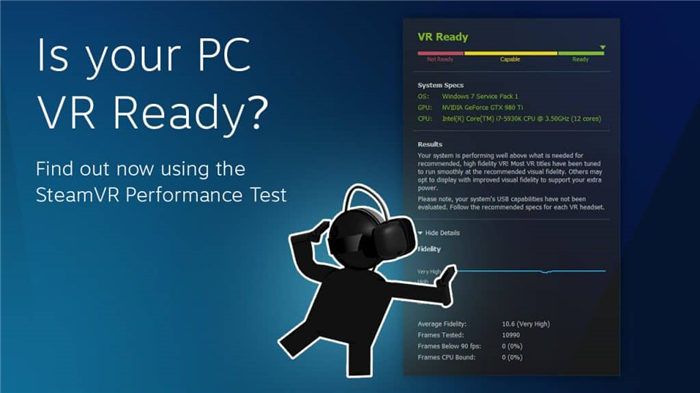 With this tool, you can easily determine if your PC is capable of running smoothly in VR at 90fps, or if any graphics card, CPU, or both improvements are needed.

The SteamVR Performance Test will identify your hardware and return a graph based on your results. Thus, you will know if your desktop is good enough or if you need to update or even replace your computer system. 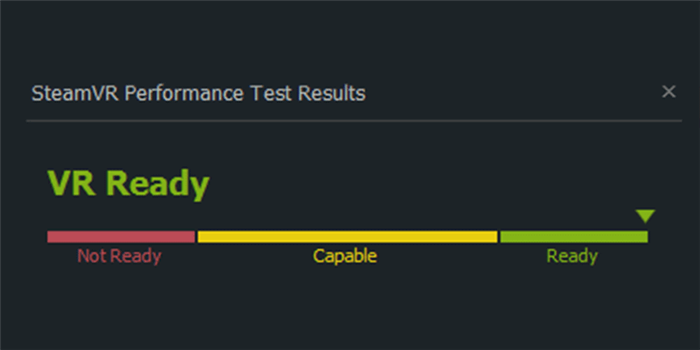 The third great weapon in the VR race is the Sony PlayStation VR goggles, which entered the market in October 2016 as an accessory for the PlayStation 4 game console. Both the PlayStation 4 and the new PlayStation 4 Pro are compatible with headsets, but the pro will run VR games at higher screen resolutions and frames per second.

What You Need for VR

As technology advances, VR is growing. Tracking head or body movements can translate into specific results in the virtual world. For this reason, it’s important to have a low latency device so that your actions and reactions are instantly transformed.

The device also requires a high frame rate (generally a minimum of 60 FPS, 90 is recommended) to keep the virtual world real. Frequent jumping or chopping would completely destroy the illusion and experience.

You need a decent internet speed when playing VR, but most of the game was downloaded before the game started, allowing you to move freely in the virtual world.

You may need to think about your PC’s upgraded components before upgrading your internet plan. Your CPU or graphics card may be causing problems in the game. That being said, if everything on your PC gets updated, look for a 600 Mbps internet plan.

Some headsets offer a physical IPD adjustment. This shifts the lenses and display panels to place them more directly in front of the pupils of a wide range of people. Other headsets do not allow you to physically adjust this, but may offer software customization to compensate for this variability in humans.

Today, VR equipment manufacturers have developed headsets that don’t actually require a computer to function. If you’re a console gamer and want to get into VR without any of the fuss of learning to build a PC for VR, you should take a look at the Oculus Quest series. These are entry-level wireless headsets that work without any bindings so you can pick and play most of the good virtual reality games wherever you are, such as Beat Saber and Pistol Whip. They’re not super strong, and are surprisingly cheap as a result, selling them for $ 299 on the base model.

The best part is that you can use them to stream high-quality VR games from your computer if you already have a gaming PC and have a decent internet connection. You can also use an Oculus Link cable to connect the Quest device to your gaming PC to increase its power and play more challenging Oculus Rift games if your internet connection isn’t good enough. PlayStation 4 or PlayStation 5 owners can also opt for a PlayStation VR package for about the same price if they wish to completely skip the need for a computer. If you go this route, we strongly recommend checking out the best PSVR space games we found – they are awesome!

The full PlayStation VR setup includes a PSVR headset, camera, and touch controllers. No PC required, but you will need at least a PlayStation 4 to use it. (Image credit: Sony Interactive Entertainment LLC)

However, if we take Half-Life: Alyx as a benchmark for VR, you’ll need a more powerful headset and gaming PC to enjoy it. There isn’t much mid-range when looking at the current landscape, as most standard virtual reality setups will cost around 400,000, making any long-term solution high-end. The obvious choice right now would be Valve Index, which costs $ 999 for the full kit and comes bundled with Half-Life: Alyx. One thing to look out for with high-end VR headsets is that many of them require room-scale setup.

Valve Index uses lighthouses, which means you’ll have to place two cameras in your room while looking at a wide open space where you can track your body, so you’ll need a large, clean playing space before you start. Other headsets, especially entry-level headsets like the Oculus Quest 2, use inside tracking, which means the headset detects where you are and you need to draw a boundary around you to tell the headset where you want to play. This is a more affordable solution for small spaces, but tracking is understandably less reliable.

How to build a PC for VR: Specs

With all that in mind, it’s time to think about your gaming PC to complete your virtual reality setup. The best place to start building a VR PC is to take a look at the system requirements of the headset you are about to buy. If you own Steam, Valve offers a handy tool to check if your hardware is capable of supporting the Valve Index, but most other headsets will offer system requirements on the store page that you can disable in preparation for building a PC for VR.

The minimum specs for Valve Index are 8 GB RAM, NVIDIA GTX 970 / AMD RX 480 and a Dual Core processor. Recommended specs require a quad-core processor and an NVIDIA GTX 1070 or better card. You’ll also need USB 3.0 ports for the best experience, and DisplayPort 1.2+ inputs on the back of the headset’s display set as it doesn’t support HDMI.

Created by Steam, the Valve Index VR Kit includes everything you need to start your VR adventure, including Half-Life: Alyx. (Image credit: Valve)

If we take some of the other most popular VR games as an example, Sword and Sorcery recommends 16GB RAM, Intel Core i7 processor and NVIDIA GTX 1070. Recommended specification of Pavlov VR multiplayer shooter is 16GB RAM, that is Six Core 4 Processor GHz + and RTX 2080.

As you can see from the examples above, the most important parts of any VR computer are the graphics card, RAM, and CPU / CPU. It should also be noted that many of the software specs are higher than the base specs of the headset itself. You don’t want to save on any of these parts as you prepare to build a VR PC, especially if you want to future-proof your VR platform. Most importantly, you don’t want to end up in a situation where you’ve bought an expensive headset, but you can’t make the most of it, so base your gear on the games you want to play.

I have NVIDIA RTX 2080 Super, Ryzen 5 3600, and 16GB of RAM in my personal VR hardware (which is paired with Valve’s index). This allows me to browse most games at high settings and crank up the internal Hz on the headset display for a deeper immersion. This would be a great benchmark for any solid VR computer. Just make sure you pair it with a compatible motherboard, a high-powered PSU (google the recommended pairing of your graphics card), and a case that provides good airflow to keep your system safe and cool.

“This is a really new communication platform. By feeling truly present, you can share unlimited space and experiences with the people in your life. Imagine not only sharing your online moments with your friends, but all your experiences and adventures.”