What Is Call Of Duty Zombies Outbreak And Why Is It A Big Deal?

This week, Call of Duty: Black Ops Cold War got a new Zombie mode, Outbreak. Well, “mode” is kind of treating this experiment lightly, because it very well could be the framework of an entirely new Zombies experience – and one that’s far more compelling for folks that aren’t already immersed in the round-based puzzle-hunting and metasolving that Zombies is known for. In short, Outbreak is an open-world, co-op romp that draws upon many, many enjoyable elements that you can find in other CoD games and modes, today’s looter shooters, ARPGs, and even roguelites. Now, I don’t think what’s there in Outbreak is the final, realized version of what this mode can be, but rather some nascent aether where a breakout, big deal mode (or even game) could one day be. Let’s dive in.

First, something needs to be stated. I’ve tried to drag friends along from CoD multiplayer modes into Zombies for years and years, but they always bounce out after a round or two to head back to kill confirmed or Warzone. That’s fine, because those games are a lot of fun, sure. But Outbreak can get its hooks into players that don’t gel with the round-based, window-boarding, puzzle-hunting template. You give the same players a map with a bunch of weird icons to explore, events to capitalize and grow on, and take away the timing elements that keep them huddled up near a wall until they have enough cash to open a door, and things change fast. While I don’t think there’s enough variety in Outbreak yet and that the mode needs a little more variance and some pacing tweaks (Outbreak is a loooooooong game, when you’re doing well), the framework here is enthralling in comparison to the Zombies we already know and sometimes love.

While I do enjoy many elements from the Call of Duty Zombies lineup, the formula was in need of a shakeup, or at least an alternative. Outbreak lets the Zombies design team draw upon a ton of different things that already exist in the CoD universe, from large maps and vehicles and the concept of loot chests from Warzone and shove them all into a delicious undead wrap that’s way more enjoyable to traverse with friends. In a way, it’s almost like a roguelike first-person shooter role-playing game. Yes, that’s a thing I said about Call of Duty Zombies. And it works! What a world. 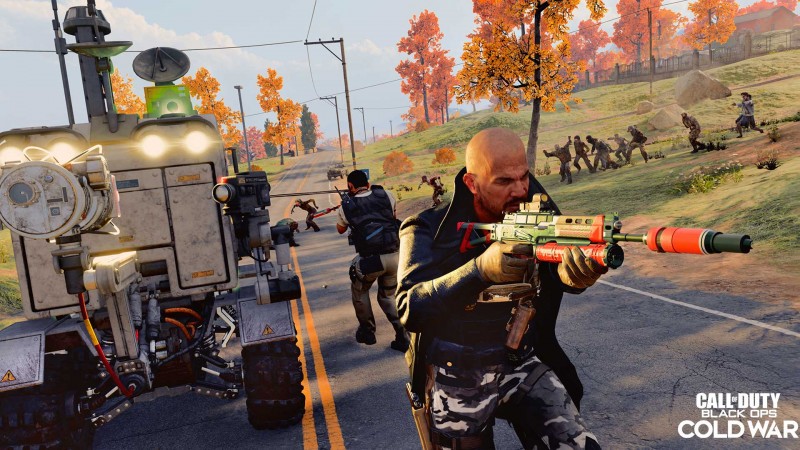 Access to vehicles changes a lot, for both traversal and combat considerations. Sure, I did bug out an enemy boss by shoving him under the ground by ramming into him and make it so we couldn’t complete the map, but running over your standard issue legions is a lot of fun. Upgrading after each level feels meaningful, whether you’re packing a punch on your weapon(s), loading up on special ammo to shatter armored terrors, or just gearing up on armor. Even the mundane task of picking up a loot chest has some degree of intensity in this mode, as there’s always a small chance that the chest could actually be a mimic enemy disguised as a chest. Who doesn’t love mimics? You know, maybe Outbreak really is the Dark Souls of Call of Duty Zombies. Now that’s not a big deal, but when it spawns right on top of you and you’re split up from your main group, it could be a catalyst in a chain of events that could wipe your party.

The mode could use some big tweaks and bigger experiments, but the shell that’s been crafted here with Season 2 using bits and pieces of everything CoD is a stellar one. While matches that go on for hours as fastidious players make sure they scoop up every power up and unlock every chest are a bit much, having different main objectives in each map that aren’t just killing a boss is welcome. Whether you get ported to a house to have a “classic” zombies objective, have to haul resources across the map under duress, chase a boss down, or escort the payload, there’s some nice replayability already in place, and we’re just getting started. The team has relayed that the goal is to inject some of the other zombie elements, like the fiendish puzzles and curious curios, into Season 3 and beyond as they determine which directions to take Outbreak in the future.

So what would I like to see from here? Enemy variety, event variety, and the willingness to lean into this mode as the full-fledged team-based role-playing roguelike/roguelite that it so desperately wants to be. You can feel the energy from pseudo-MMO experiences like Destiny ebbing out in this one, just waiting to be harnessed. Hell, add classes. Add experience points or something. Add permanent progression elements (they already have this to a lesser extent, but I’m saying go for it and add more). Add straight up dungeon crawls. It’s Zombies, it’ll work. Anyway, check out Outbreak and enjoy, it’s the cool chassis where something epic may someday be constructed.